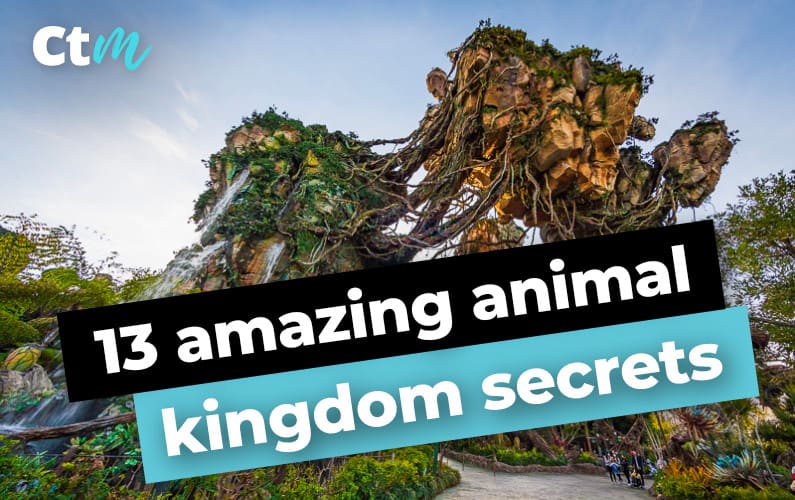 Disney’s Animal Kingdom is in many ways a hidden gem when it comes to the Walt Disney World Resort & Parks. It’s the one park that many guests would say is an afterthought many times and is more of a favorite of locals, it actually has many secrets and fun facts scattered throughout the park. In this article we will talk about 13 of the Animal Kingdom secrets and fun facts that you can find on your next visit to Walt Disney World.

According to Animal Kingdom’s lead landscape architect, Paul Comstock, the park’s location is the perfect spot for “proper sun orientation.” When you enter Disney’s Animal Kingdom the sun arc is to your back so that it illuminates the trees, the structures, and waterfalls and especially the Tree of Life. This is done purposefully so that no matter what time of day it is, all your Animal Kingdom theme park pictures will turn out beautifully. 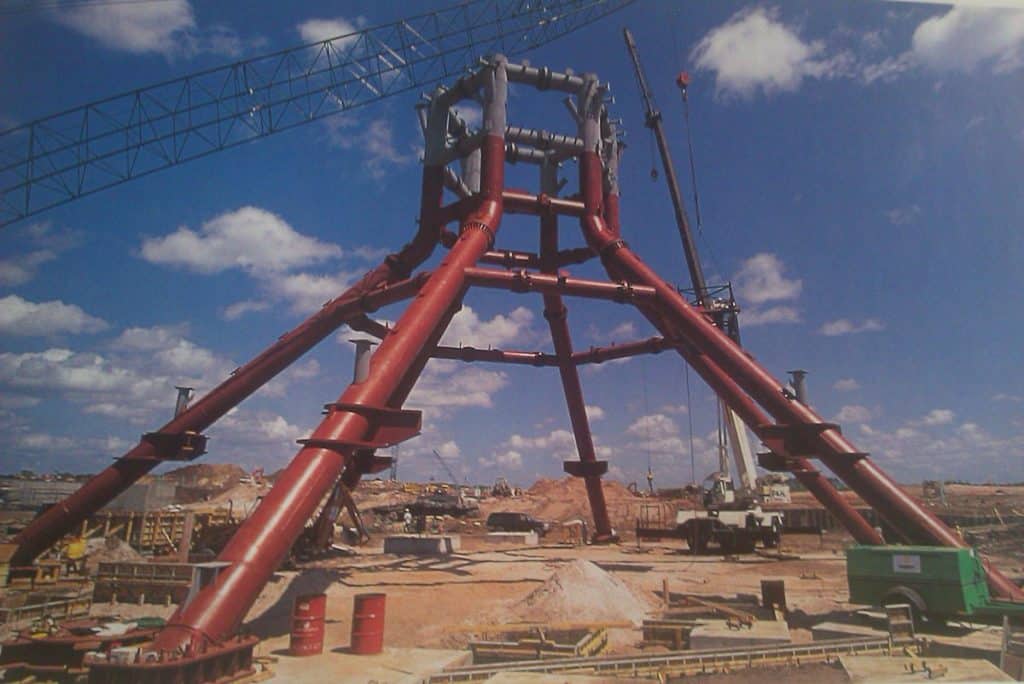 This is one of the Animal Kingdom secrets that may shock you but the Tree of Life is not an actual tree. Although Disney’s Animal Kingdom theme park icon looks like a real live tree, it’s actually an upside-down repurposed oil rig. Thanks to the sturdiness of the oil rig skeleton, it’s able to withstand high winds associated with hurricanes that occasionally sweep across the Orlando area.

Located across from the Animal Kingdom Starbucks is the entrance to the Tree of Life Garden, a pathway that takes you right up to the front of the Tree of Life. Once you enter the path, you’ll stumble upon the former It’s Tough to Be a Bug queue. Although the show doesn’t use this space anymore, you can still find leftover buggy remnants. Look for the giant tree root and follow the bug tracks to one of the root’s many teeny-tiny holes. Take a peek inside any of these holes and you’re attention will be directed towards – what else? The ANT carving on the park icon.

4. Are You Team Predatory or Team Prey?

If you head over to Flame Tree Barbecue located in Discovery Island, take a seat in the pagoda area and take a look at the arches. You will see that they are decorated with animal carvings. However, what’s different about the Flame Tree animal carvings opposed to the Tree of Life carvings is the theme: Predator vs. Prey.

In one area you’ll see a carving of an alligator gobbing up a fish or an anteater slurping up ants; in another area an owl eye-balling a tasty bunny rabbit or spiders chasing butterflies, and eels tracking down crabs for a midday snack. You’ve also got an area where eagles are hunting down snakes, who in turn are hunting down mice (the whole Circle of Life thing, you know?) So why all the emphasis on animals-eating-animals here? Well that’s because it’s kinda the idea behind Flame Tree Barbecue. See, when you order their tasty pulled pork or ribs, YOU technically become the predator at Animal Kingdom. 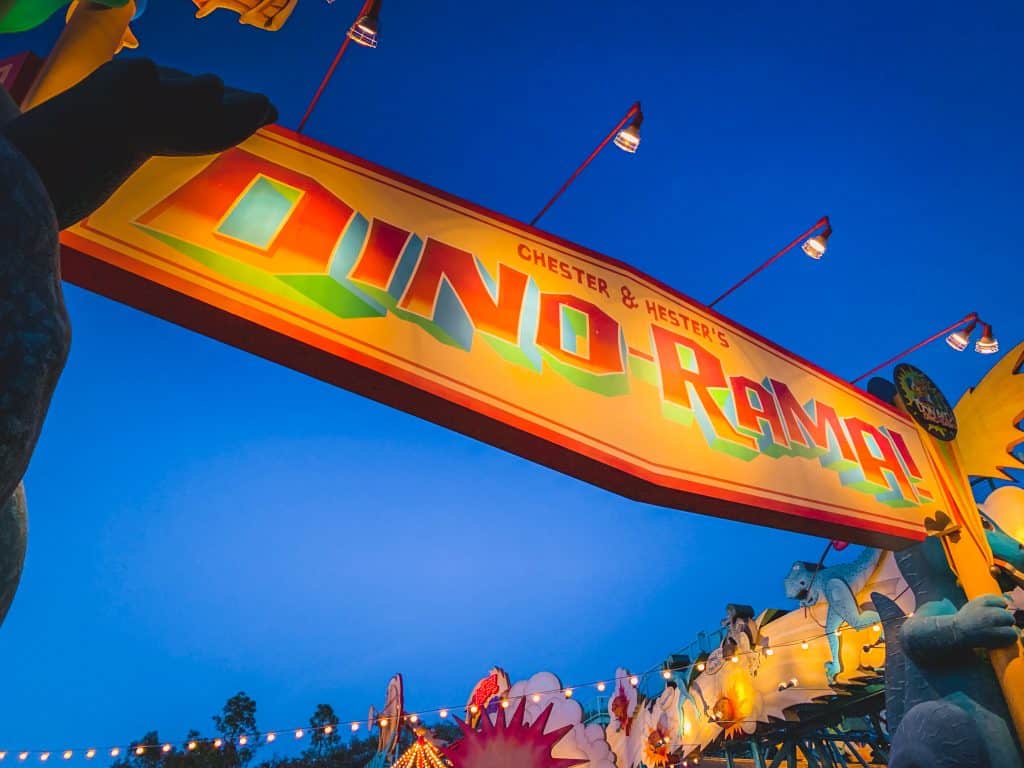 Pop quiz! When did Disney’s Animal Kingdom theme park first open it’s gates? If you said April 22, 1998 (which also happens to be Earth Day) then you deserve a Wilderness Explorers Badge! Walt Disney World likes to add opening dates as little Easter eggs throughout its parks and Animal Kingdom is no different. Head into DinoLand USA and check out the Diggs County city signs. They advertise the highway that the DinoLand USA roadside attractions are on, and that highway is…Route 498.

As you’re entering DinoLand USA, look to your right and you’ll find a dinosaur like no other. Chances are you’ve probably walked by this statue many times, but if you stop and take a look you’ll see that this dino has been created out of found objects such as pebbles, glass bottle bits, etc., and there’s probably even a hidden Mickey or two.

However, the coolest thing about this statue is that it was created by a folk artist who went by the name of – get this – Mr. Imagination! No, seriously – that was his real name and not something thought up by the Imagineering Team! You can find the name of the artist on the base of the dino-riffic statue in Animal Kingdom. 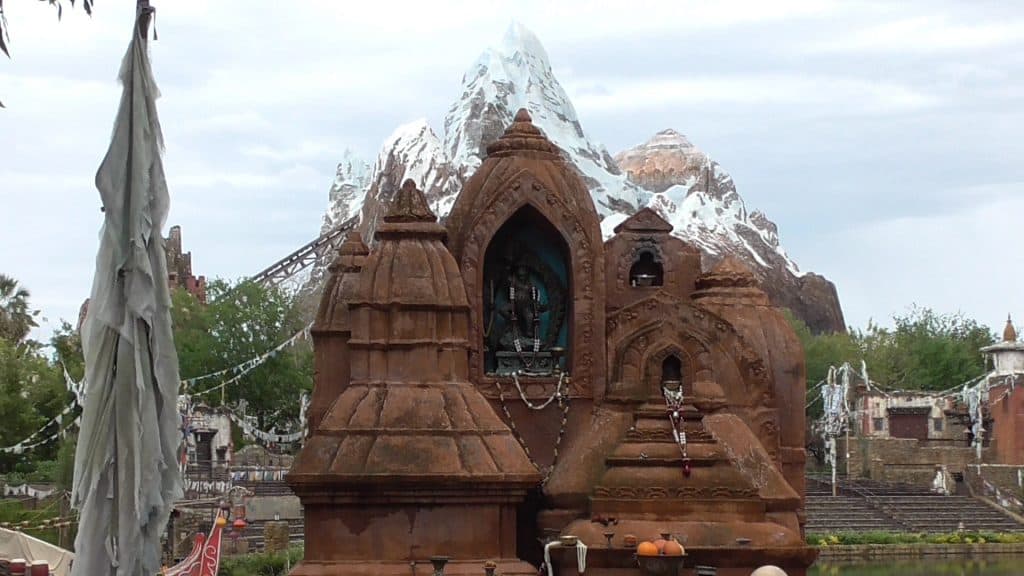 When you’re looking across Discovery River over to Expedition Everest: Legend of the Forbidden Mountain in Asia, you’ll find a shrine that that is dedicated to the Rapscallion Yeti. As the story goes, the Anandapur locals would leave offerings and gifts at the shrine to (hopefully) get them on the Yeti’s good side. But did you know that if you stand directly in front of the shrine (where you will usually find a PhotoPass Photographer) you will see that it is the EXACT outline of the forbidden mountain?!

8. The Scoop on Poop

If you decide to, um, relieve yourself while at Rafiki’s Planet Watch, you will also be getting a biology lesson while you read all about animal poop on the back of your restroom stall. While we don’t want to give away all the fun scat facts, we will tell you that you will walk out of there knowing probably much more then you ever thought you needed to know about animals going Number Two. You’re always learning something at Animal Kingdom theme park.

Did you know that Disney’s Animal Kingdom is home to several famous movie stars? Well, if you take the Wildlife Express Train to Conservation Station and head over to the Affection Section (Disney’s petting zoo area) over by Rafiki’s Planet Watch, not only can you give belly rubs and ear scratches to goats, donkeys and sheep, but you can also meet the one and only Miss Charlotte May – the adorable black-spotted piggy who was the real life inspiration behind Pua from Disney’s Moana!

But WAIT! There’s more…once you make it back to Africa, take a ride on Kilimanjaro Safaris and if you are lucky, you may spot the lions who influenced the characters in Disney’s classic animated file, The Lion King, lounging on their own Pride Rock.

Speaking of Kilimanjaro Safaris, did you know it wasn’t always the peaceful journey through Africa’s amazing wildlife we know today? Back in the early days of Animal Kingdom, the safari had a dark backstory regarding illegal elephant poaching, which has been a real concern for Africa’s elephant population for a long time now due to the value of their tusks.

So in the former version of Kilimanjaro Safaris, the story revolved around a mama elephant and her baby – Big Red and Baby Red – who were captured by poachers. The safari guide would get a call over the walkie talkie that the elephants had been captured and would then take the tour off the trail and go off-road in a wild pursuit to save the two elephants.

The good news was that we saved Baby Red; the bad news was that Big Red was not so fortunate. And neither were the guests of the tour who then were driven past a very gruesome scene which involved the lifeless, tuskless body of Big Red (a model, of course as no actual elephants were harmed on this ride).

Of course the purpose of this ride was to act as a cautionary tale on how serious poaching had become and how important is was to save the elephants in the wild. However, the scene depicting Big Red’s lifeless body was just too graphic for guests and Disney went ahead and removed the whole poaching plot and Kilimanjaro Safaris became the ride we know today.

Every now and then a safari guide on your tour may still point out signs of poachers in the area and list the dangers poachers still pose on the elephant population today, but you don’t have to worry about any graphic imagery to go along with it.

Wait – isn’t Jafar supposed to be living out 10,000 years in the Cave of Wonders? What’s he doing out of his lamp and in Disney’s Animal Kingdom? We’re used to tracking down Hidden Mickeys, but did you know that there’s a Hidden Jafar in Animal Kingdom?

When you walk across the bridge located on Gorilla Falls Trails, you will see a GIANT rock and if you look closely enough you will see that if resembles the elongated face of the villain from Disney’s animated classic, Aladdin. No wonder it’s referred to as Jafar Rock!

As you explore the Africa section of Walt Disney World’s Animal Kingdom, take time to admire the roofs in the Harambe Village area. According to the Orlando Sentinel, these roofs were actually thatched by people from Zululand in South Africa; 13 of the tribesman from Kwazulu-Natal, South Africa, spent nearly 11 months in Central Florida to make these roofs as authentic to the park as possible. 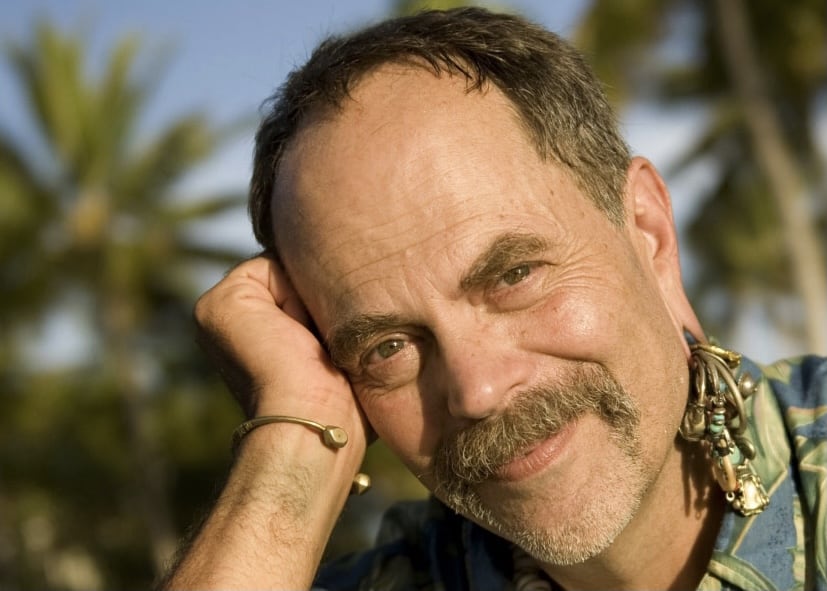 As most people know, Joe Rohde was the lead design Imagineer behind Pandora: World of Avatar in Disney’s Animal Kingdom. What you might not know is that he left his mark in two areas of the park. First, you can find his handprint (along with Avatar director James Cameron and Avatar producer Jon Landau) on the wall of the exist of Flight of Passage. And second, you can find him hanging around Satu’li Canteen.

Where you might ask? Well the next time you’re at this quick service restaurant ordering those delicious cheeseburger pods (which was also inspired by the Rohde family), take a look at around at the walls and you might just find a picture of the Na’vi and humans at the Pandora groundbreaking ceremony. And who’s that guy on the far right holding his blue shovel proudly? The man, the myth, the legend, Mr. Joe Rhode.

On this episode, we have some news including what we learned in the town hall with Bob Iger and cast members, as well as the first look at the reimagined Little Mermaid themed Caribbean Beach rooms. We also share our day at this year’s EPCOT International Festival of the Holidays 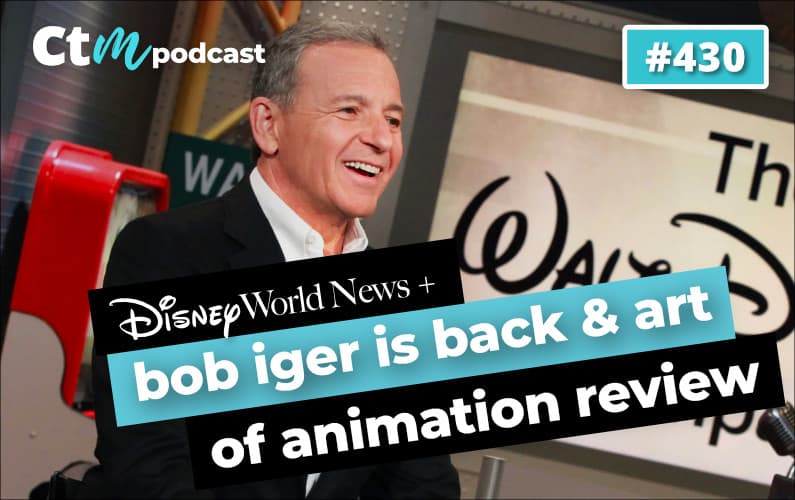 On this episode, we talk about the biggest news of the year, that Bob Chapek has stepped down at CEO of The Walt Disney Co, and Bob Iger has returned to lead. We also review our recent stay at Disney’s Art of Animation in the Cars Family Suite. CTM Apparel 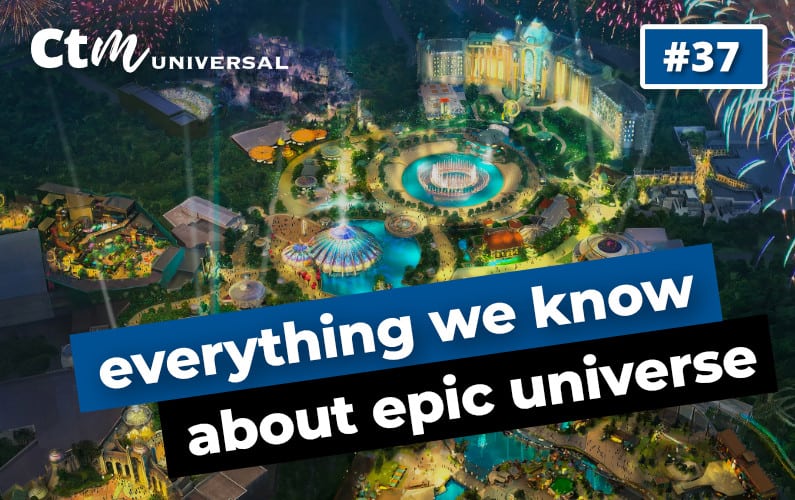 CTM Universal: Ep 37 – KidZone Is Closing & Everything We Know About Epic Universe

On this episode, we talk about some Universal Studios news including the announcement that KidZone is closing and we talk about everything we know about what is coming to Epic Universe. Join Club 32 Help us to fund & grow the show by becoming part of Club 32! You’ll get

CTM Universal: Ep 37 – KidZone Is Closing & Everything We Know About Epic Universe