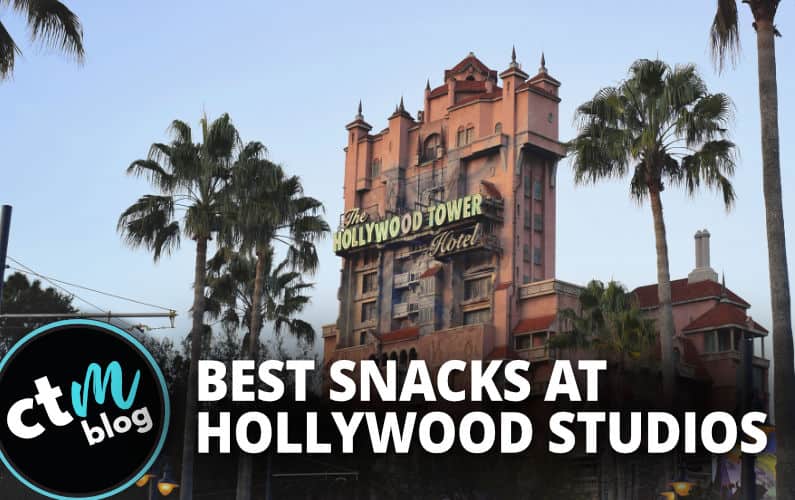 Disney’s Hollywood Studios has never really been touted as a place in Walt Disney World to get great food, in fact, it may have left you wanting more at the end of the day. With delicious options at Animal Kingdom, Magic Kingdom, and EPCOT, it’s really easy to get left behind. Sure, you could always get the staples like the Mickey ice cream bar (chocolate coated vanilla ice cream shaped like Mickey), but there was nothing really inspiring. However, the Walt Disney Company has added two new lands to the park over the last couple of years, and with those additions, we also have some tasty new treats to feature! The opening of Toy Story Land brought us Woody’s Lunch Box, that presents two items on our list worth trying, as well as some classics throughout the park that have held strong as fan favorites over the years.

OUR 7 BEST SNACKS AT HOLLYWOOD STUDIOS

Without further adieu, from popcorn to potato barrels, and sugar laden to dairy free, here are our top 7 favorite choices for the best Hollywood Studios snacks and really the best snacks in Disney World as well. When planning your next trip, you’ll want to make sure you put all of these delicious Disney World snacks on your must eat list.

To kick off our best snacks at Hollywood Studios review we head to somewhere in the backyard, Andy dropped his lunch box and it opened into one of the best quick service dining options in all of Walt Disney World. Our first selection that we have chosen as one of our favorite snack options is the Lunch Box Tart. Shaped somewhat like a pop-tart, this very sweet, very flavorful dessert is a great treat after enjoying the fun rides and attractions of Toy Story Land. Generally, there are two different kinds of tarts being offered: chocolate hazelnut filling with maple fondant and bacon crumbles, or a fruit flavor based tart. Each tart is worth a try (try the chocolate hazelnut with a scoop of vanilla ice cream), with scrumptious flavors that will send your taste buds to infinity and beyond! 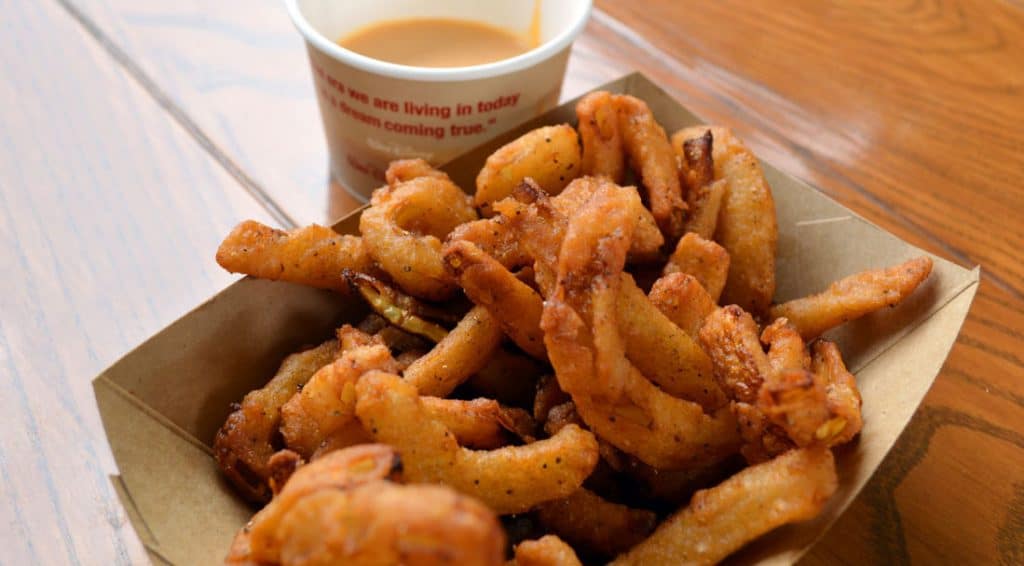 When we think of best snacks at Hollywood Studios, we like the savory side as well. Ready for an appetizer type option to satisfy your cravings? If you are in the Rockin’ Rollercoaster/Tower of Terror area, then take a visit to Rosie’s All-American Cafe on Sunset Boulevard! Served with Texas Petal sauce, this generous portion of fried onion straws will certainly fill the hunger void. Rosie’s also features Allergy-Friendly items, with a variety of snacks for both kids and adults. 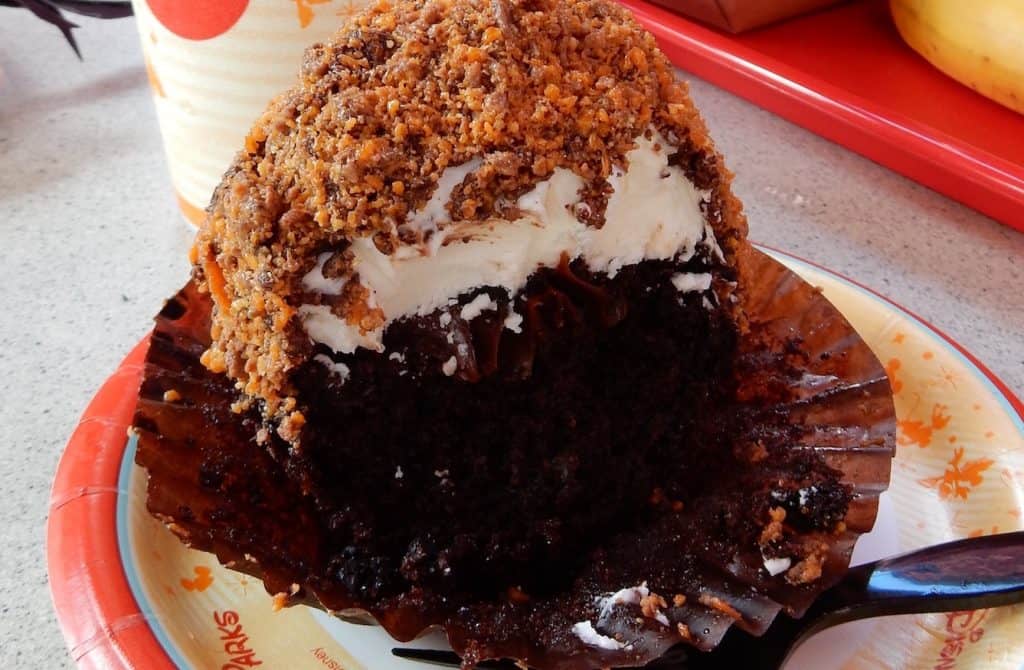 Once known as the Butterfinger Cupcake, this tasty dessert has had a cult following at Walt Disney World for years, and now finds it’s way into our best snacks at Hollywood Studios list. Once found at Starring Rolls (which is no longer open), you can find this iconic Disney cupcake at the Trolley Car Cafe. The chocolate cupcake, is filled with a center of rich, gooey chocolate fudge sauce. Topped with a peanut butter butter cream frosting and finished with a chocolate peanut butter crunch, this cupcake will definitely please the palate and satisfy your sweet tooth. A great value as a Disney Dining Plan snack credit, and a sweet way to either start or finish your day at Hollywood Studios! 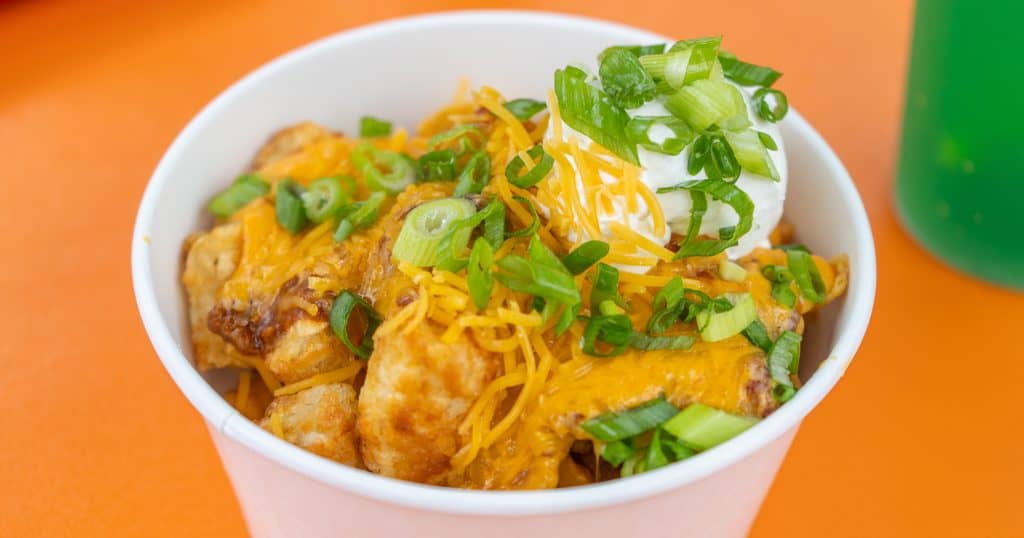 For something a bit more savory and filling at Hollywood Studios, and you are hanging around Toy Story Land, try the Totchos! This here dish, inspired by the Old West and Sheriff Woody himself, is actually listed as an entree choice on the menu at Woody’s Lunch Box, but most guests find it to be the perfect “in-between” time meal. In this dish, Potato Barrels (tater tots – why do we have to call them Potato Barrels again?) are topped with beef and bean chili, queso with tomatoes, corn chips and a dollop of sour cream and green onion. All the makings to satisfy a cowboy’s hunger! So, if you are looking for a hearty snack, or even a light lunch, at Hollywood Studios, don’t sleep on the Totchos. 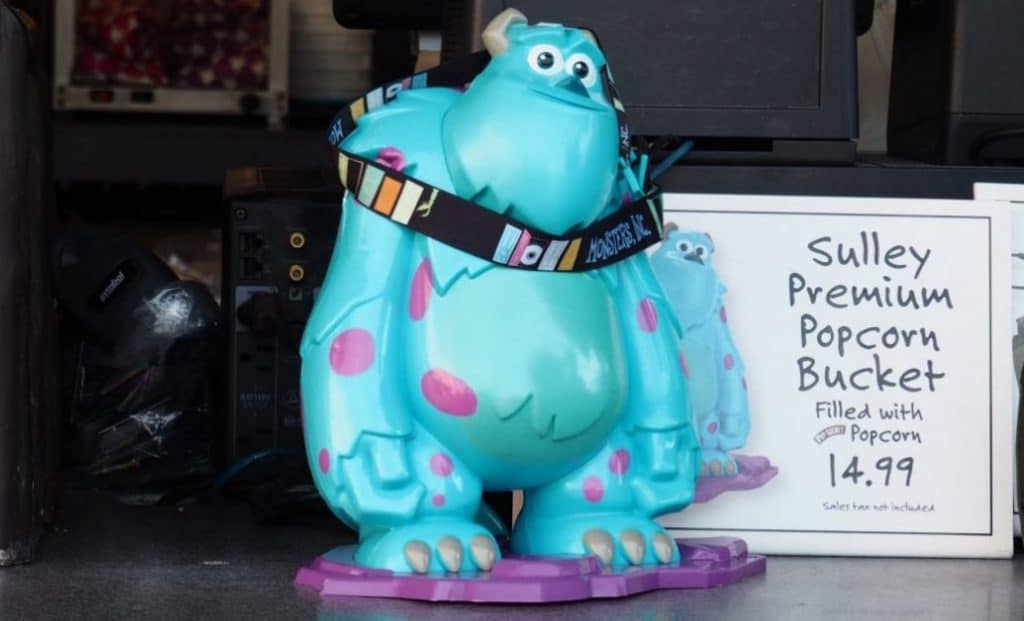 One of the best snacks available throughout Hollywood Studios (and really one of the best snacks at Disney World) that actually presents one of the best values during your entire stay too, is Disney’s Street Cart Popcorn. I don’t know what it is about the popcorn at Disney. It may not be fancy, but it is heavily salted with a nice butter flavor, it simply satisfies that need for something salty. I think they add a little Disney Magic too, as it is seriously addicting.

Here’s the deal… on your first day at a Disney Park, buy the Souvenir Bucket (usually around $10) filled with popcorn. Throughout the day, you can fill up your bucket for only $2.00 per refill (that’s about as close to free at Disney as you’ll get). You are also good to use the bucket at all of the parks – so even if you are hopping over to Animal Kingdom, its still always only $2.00 to refill it!

Disney’s Hollywood Studios also sells specialty popcorn buckets, character or seasonal offerings, and while they are more expensive, you can still refill those buckets for only $2.00 as well. If you and your group love popcorn, this is the perfect option to share as a snack, and to also have the ability to save some money in the process. It will also make a great souvenir to take home with you. If you are using the dining plan, you can use a snack credit for a refill, but you might want to save it for other things that you find throughout the parks that might be more expensive. 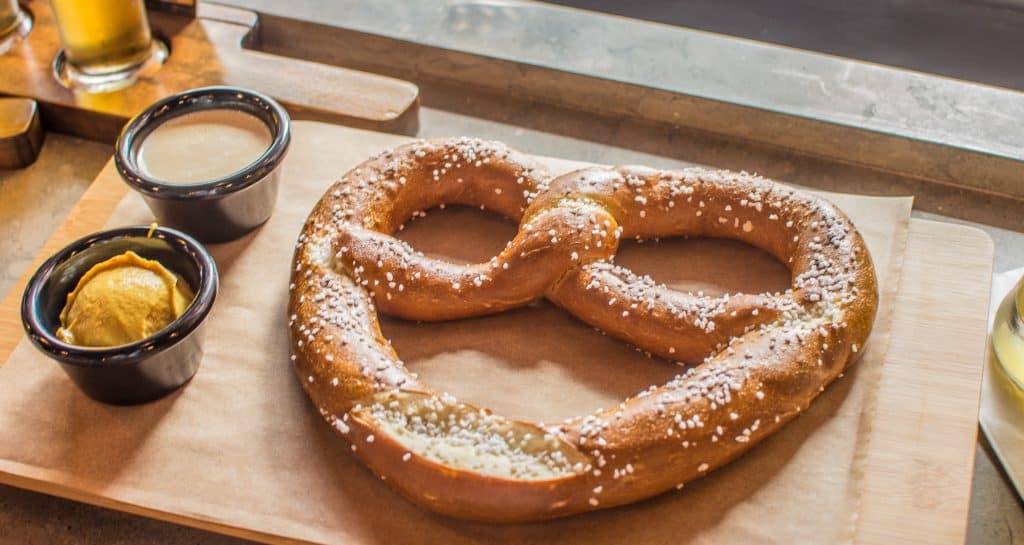 Easily described as the best pretzel at not just Hollywood Studios but all of Disney World (yes, better than the one in the Germany pavilion at Epcot), this snack option goes great with some of the brewery options at Baseline Tap House. Stop in for a seat at the bar and enjoy the pretzel or other light snack offerings for a break from the Florida heat, or just as a meet up with friends. Served with Beer-Cheese Fondue (OMG the Cheese Fondue) and Spicy Mustard sauce, this plate-sized item is easy to share, and a “must-try” when visiting Hollywood Studios. This is not a pretzel that you will want to walk around with. You’ll want to eat it on site, so grab a beer, wine or soda and enjoy. You’ll find Baseline Taphouse not only on our best Hollywood Studios snacks list but other “best of” lists as well. It’s one of Disney’s hidden gems that we make a point of frequenting whenever we are here.

The newest land at Hollywood Studios, Galaxy’s Edge also has one of the top snacks at Hollywood Studios with the introduction of Blue and Green Milk. If you’re unfamiliar with Star Wars, this is a take on the milk that Luke Skywalker drinks in the original Star Wars (also drinks it in The Last Jedi), and Disney is hoping this is their version of Butterbeer that you can find at Universal Studios in Diagon Alley within their Harry Potter area. This “milk” is dairy free (no milk or ice cream here), so even those with dairy restrictions can enjoy these.

Of the two milks, we liked the blue better than the green but both are good! You can also get it the blue milk with a shot of rum, and the green with tequila, which we think enhances the flavor. On a hot day in Hollywood Studios it’s a nice and cool treat. Though not “food”, this frosty beverage is still a popular snack option so be prepared to stand in line or get there early to try it.

Although we are doing the “Top 7” Snacks, I could not let this list conclude without mentioning the fan favorite Carrot Cake Cookies. Once found at the Writers Stop (now the Baseline Taphouse where you find that incredible Bavarian pretzel), the Carrot Cake Cookies are now served at the Trolley Car Cafe. Though not in its previously glorious form, these “cookies” combine a soft Carrot Cake with a creamy, slightly tangy cream cheese filling, and I return to this time and time again. It may not be what you remember, but it still packs all of that incredible flavor.

We love to snack. We have actually made full days without eating an actual meal as the snacks in Disney are generally extremely delicious. We’re glad that Disney’s Hollywood Studios has made great strides in their snack game. We may now need to take it on to see if we can go a full day just snacking.

The great thing about Walt Disney World is that, no matter what you are talking about, you will always get a little bit of the classics, along with a taste of some thing new. Although not best known for its food options, Hollywood Studios still has some iconic treats (Mickey ice cream bar), and it’s also bringing some exciting items to the “must have” table that look delicious and are starting to get our attention. So now you know where to find snacking options for every member of your family. With the addition of additional lands and areas, we will continue to see more snack options become available as the park expands. We’re excited to sample all of the most recent food offerings and look forward to bringing you the best reviews of upcoming guest favorites.

If you enjoyed this top snacks at Hollywood Studios article then you should be sure to check out the podcast and some of the articles we have here at like the Best Quick Service At Hollywood Studios or the best breakfast options at Animal Kingdom. 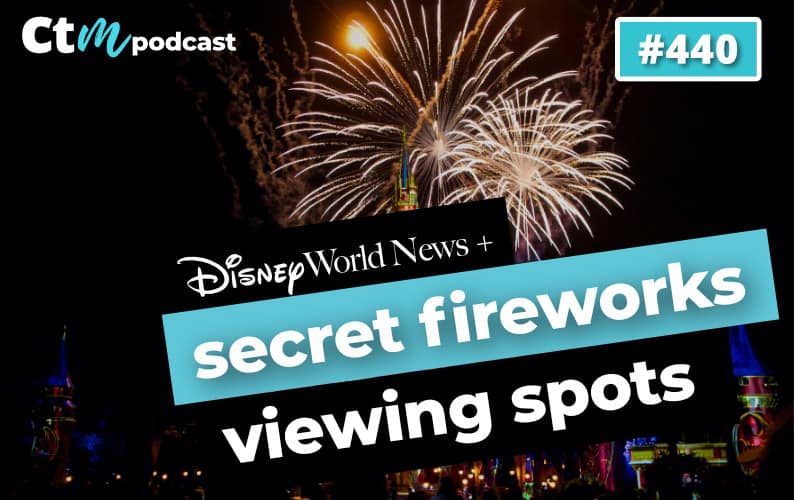 On this episode, we talk about some Disney news including this year’s concert lineup for Garden Rocks at EPCOT International Flower and Garden Festival and Tron having a virtual queue and lockers to ride. We also discuss the best places to watch fireworks, in the parks or outside the parks.