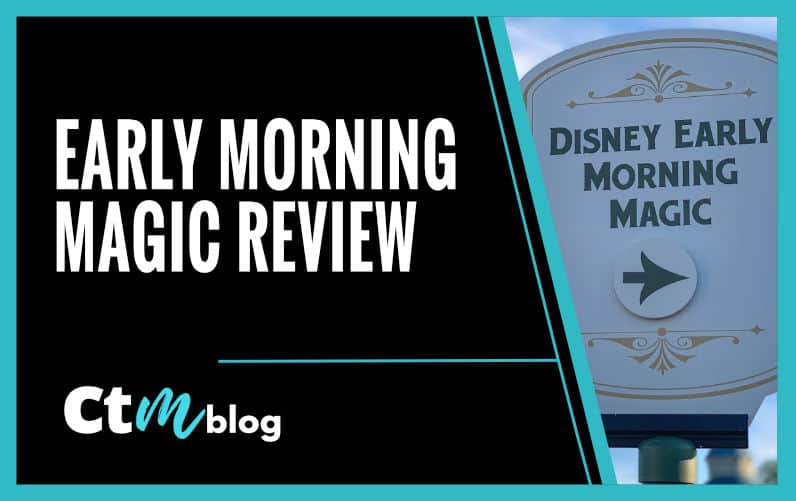 While any trip to Disney is magical, just like any family, we are always looking for other ways to add a little extra magic to our vacation. During one of our recent trips to the happiest place on earth, we decided to check out Early Morning Magic at Magic Kingdom. We had the best time and we are so excited to share our Early Morning Magic review with you! If you are an early riser, this morning event might be a way to add a little extra magic to your Disney vacation! So, here is a rundown of our personal review of the event.

First Off, What Is Early Morning Magic?

Here is the direct description from Disney:

“Make your Magic Kingdom morning more magical than ever with this limited-entry, first-access experience in the park. With the purchase of regular theme park admission and a reservation to Disney Early Morning Magic, Guests of all ages can be among the first to enter Magic Kingdom park.

The rest of us, and there weren’t that many, started towards the rides in Fantasyland for the Early Morning Magic event. The Cast Members were checking for wristbands and if you didn’t have one, they weren’t letting you on the ride.  They served breakfast from 8:30 am until 10 am, so our plan was to ride as many rides as we could and then have breakfast right before 10 am because they’ll let you eat until 11 am and at that point, the park will start getting crowded anyway.

So we got on Seven Dwarfs Mine Train and there was no wait – we just walked right on.  I think there were maybe three other people in there with us, so it was awesome. They wouldn’t let us just sit there and ride again, we had to actually get out and go through the queue, but we still rode it multiple times.  Jared rode it six or seven times, and I rode it twice – mainly because I started feeling a little sick because of my motion sickness.

So even though it’s considered a kiddie coaster, it still affected me. But my mom and sister rode it a bunch of times, too.  Then, we rode The Many Adventures of Winnie the Pooh, which our daughter loved, and then Peter Pan’s Flight twice. At that point, it was still pretty early in the morning (only half an hour had gone by) and we were ready for breakfast!

Now when we first saw that the hard ticket event was less than two hours long, we thought, “What?  That’s not a lot of time!” But there weren’t a lot of people there and we didn’t have to wait in any lines, so at this point the Early Morning Magic review is off to a nice start.  Time went by leisurely. I mean it’s almost like two hours is too much time. Just being able to ride Seven Dwarfs that many times (basically until Jared was tired of riding it), and get breakfast for $69.00 – it was well worth it and we still had another hour left.

So right around 9 am we went to breakfast. The baby was hungry, so we ate at Pinocchio Village Haus* and it was buffet style, so you could eat as much as you wanted.  I think they start serving lunch at 11, so they stopped serving breakfast a little after 10, but we could have stayed there longer. But you couldn’t even enter unless you had a wristband, so that was nice, too.

Going into this Early Morning Magic review I will say that $70 per adult and about $60 per child was kind of steep.  However, we both think it was worth it. We had literally no wait for Winnie the Pooh and Peter Pan’s Flight, no line for Seven Dwarfs and we got a pretty decent breakfast. Not having to wait in line when you have a little one is great, especially in the early morning, and you get those three major rides out of the way and don’t need to use FastPass+ on them later in the day. Instead, you can use them on something else. And I think we stayed at Magic Kingdom for a couple more hours after the event had ended that morning.

And since it is typically cooler in the morning, you could do Early Morning Magic, ride those rides in Fantasyland, eat breakfast, do a couple more rides and go back to your resort by noon and feel like you accomplished a lot.  And when you figure that a breakfast buffet – not a character meal – would probably run you about $40, then that means you paid around $30 to be in the park for less than 2 hours and ride the most popular rides in Fantasyland without a wait.  When you look at it that way, that is a great value and a great way to add an extra dash of magic to one morning of your trip!!

One thing to keep in mind is that if you have an early morning breakfast reservation and afterward you’re hoping to get in line for Seven Dwarfs Mine Train early before the park opens on a hard-ticket event day, such as Early Morning Magic, the Cast Members will actually turn you away until the park officially opens to the general public.

To sum up our Early Morning Magic review and answer the question “would you do it again?”. Yes, we’d definitely do it again, especially if we wanted to ride Mine Train and couldn’t secure a FastPass+ for it. While it is it’s not something we would need to do every trip, it did add a little extra magic that morning! We would definitely recommend this event to families that enjoy waking up early in the morning and heading out to the parks for a little extra magic!

If you enjoyed this Early Morning Magic review, you should also check out our article about Free Things To Do At Disney World!

On this Trip Tales episode, Jenny does a girls only trip to Disney with her sisters and mom after Christmas and over the New Year. She took a fireworks cruise, watched the Candlelight Processional, ate at some delicious restaurants, and celebrated the new year at EPCOT with the crazy crowds.

On this episode, we have news about Flower and Garden Festival dates and the return of some popular Princess meet n greets and attractions. We also review the first day of EPCOT International Festival of the Arts and what we thought about the food studios, art tents, merchandise, and more.